This is the foundation, the stepping-stone, to building a company that delivers world-class experiences with finesse. We are a collective of eager, fresh, perceptive minds, telling multi-dimensional stories -bridging the gap between your vision and the reality of a successful, seamless, and unforgettable experience. People, organisations, brands, corporate conglomerates, government bodies, institutions - they all have stories to tell, visions they’d like to bring to life. We identify the spark, waiting to burst into a grand firework show. We pick-up the paint brush ready to deliver the world’s next spectacle. We are here to take visions and sculpt them into reality. We engage and execute corporate as well as brand-led events and activations ranging from awards shows, summits, conferences, reward and recognition programmes, school and college activations, mall promotions, cultural movements, digital events and more. 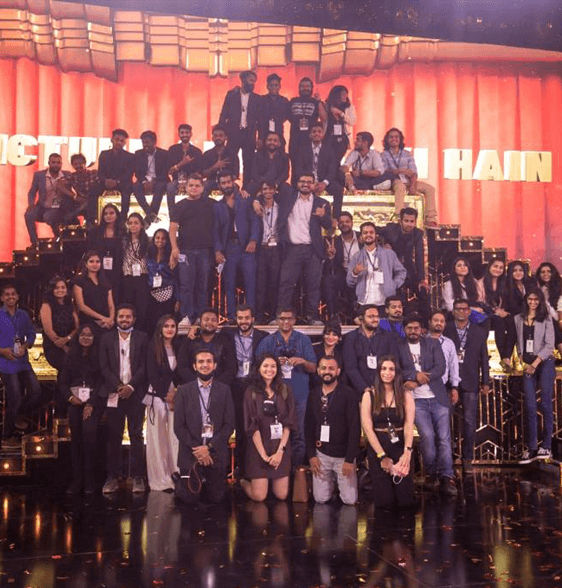 With specialized teams catering to your specific briefs, Hyperlink’s expanse stops at nothing to deliver. We think and create with you. We are in a people’s business – we understand human emotions and what makes them tick. We love adding colour to your vision to make it a reality.

SIMPLY PUT, WE LOVE WHAT WE DO.

V.G. Jaishankar is a man that has donned many hats in the experiential space. Playing an important role in consistently achieving his respective revenue targets in various corporates and strengthening operations, he has also been responsible for the development of new verticals within organizations, expanding into new markets and investing into the inclusion of technology to create a different experiential business space. Jaishankar has scaled across various organizations such as The Times Group, the Kuoni Travel Group, Zee Network Limited, The Future Group and Fountainhead Entertainment Private Limited. With Hyperlink, he aims to lookout for talent that is constantly thinking out-of-the-box and aspires to harness the power of imagination and bring it to reality. In his free time, Jaishankar loves to exercise his star power as a musician and singer. His mottos are completely in line with that of Hyperlinks, simply being, he loves what he does! 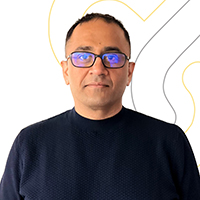 A name that’s synonymous with the experiential marketing industry, Jairam in his 27-year stint has created and produced some of the most well-known music and cultural festivals the country has seen. Named as one of the ten men that shaped India’s live entertainment and experiential industry by Event FAQs, and being a man of experience, Jairam humbly considers himself a storyteller – with an undying passion.
He has been the driving force behind multiple corporate experiences and prestigious awards ceremonies in the country. All his associations and achievements have been consistent, creative, and collaborative.
Owing to his unending passion towards show business, he has personally seen to and driven successful properties such as the Mahindra Blues Festival, Aadyam Theatre Initiative, Johnnie Walker The Journey, among others and brought to the country, a multitude of international artistes spanning across music and comedy such as Shakira, INXS, Yanni Live, Guns N Roses, the Gypsy Kings, Russell Peters, and Gabriel Iglesias to name a few.
Being a strong supporter of rising talent, he has brought the BAFTA Breakthrough program to India which aims to enable new players in the Film, Television and Gaming industries.

A man of multiple talents, Neale started off as a marketing professional in the hospitality industry slowly building a knowledge base through his professional careers that led him to co-found one of the largest experiential agencies in India – Fountainhead MKTG
He has made his name, one to remember in live experiences, music and theatre circuits in the city. Blue Star, Times of India, the Mahindra & Mahindra Group, and Diageo are a few of the many brands Neale has taken pride in building experiences for & nurturing relationships that go beyond the nuances of event management. He has also been a part of cultural experiences in India such as the Mahindra Blues Festival, Johnnie Walker The Journey, and the famous Celebrate Bandra festival. Neale leaves no stone unturned, paying attention to finer details in any venture he is a part of – a perfectionist! Outside of the world of corporates and brands, he holds an undying passion for the performing arts specifically music and theatre. He has played prominent roles in a plethora of musicals and one-act plays and has even performed alongside renowned musicians across venues in Mumbai. 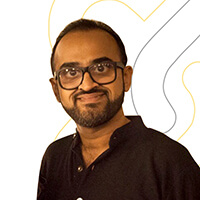 Jaiganesh has been part of the entertainment industry since 1998. Starting out in the advertising space, Jaiganesh transitioned into the experiential industry to work on boutique events and deliver pristine and luxurious experiences centred around music, theatre, and culture. Dealing on a day-to-day basis with artiste advancing, A&R, ticketing for major music properties such as Johnnie Walker The Journey, One Tree Music Festival and Mahindra Blues Festival, he has built a strong foundation for himself in the industry. Being involved with shows like Filmfare Awards, and Hindustan Times Most Stylish Awards, Jaiganesh has worked with almost everyone from the film fraternity. As the director of Hyperlink, he is now focused on growing the business and taking the company to new heights alongside his partners and family.

Rohan Salvi has garnered over 19 years of experience in the experiential marketing space. Rohan believes in leading by example, whether sitting with his team in office, or on-ground at a show. A keen thinker, he pushes the envelope and provides a comprehensive consultations and solutions toward development, creation, implementation, and consumer engagement for brands. Rohan ensures such solutions come with long-term value and more so, delivers what is expected.

Calm, collected, centred, and grounded – that’s the kind of atmosphere Pratiksha brings with her, be it speaking with a client or engaging and executing a show on-ground. An unmovable force, Pratiksha believes in maintaining a stress-free environment to ensure a well-functioning team and a smooth and successful experience. Compassion goes the mile with her! Anyone that has had the pleasure of working with Pratiksha will have nothing but a strong positive opinion of her. No event, no programme, no ceremony is too big for Pratiksha, and she sees it through with excelled planning and organization, dedication, and diligence; values and traits she strongly imbibes with the teams she works with.

Gautam Jukar is the whole production package. A force that has spent his professional career in producing everything from large scale events to film to brand experiences, you name it, he’s done it. He has had the opportunity to collaborate, engage and execute with some of the best in the industry, locally and internationally. He comes with insight that is rarely found, one that combines the grit and toughs of quick action together with the professionalism of the corporate and entertainment worlds. A hands-on, passionate, and dedicated team player, he ensures that every aspect of a project are looked into and held at a standard befitting international large-scale production. He has been a part of organizations like Radio Mirchi, 360 Degrees, Fountainhead MKTG and has produced multiple large-scale shows all over India and internationally

The experiential avenue as a creative outlet happens to be at the core of everything Margaret has dabbled with (and always will be). Working with a vast range of clients, be it corporates looking to creating an exquisite showcase or sporting leagues planning large scale kick offs and ceremonies, scale is essential and at the fore in those client deliveries. Regardless of the size of the audience.

Apaar has had over 16 years engaged in the Events & Experiential Marketing sector. He reached a decision that it was time bridge the gap between technology and experiences, marrying them into a cohesive solution. This solution provided different, scalable, and impactful changes for brand experiences, thereby enriching one’s overall interaction within an event. A workforce by himself, he has designed and managed such solutions from their inception to execution. Apaar brings these solutions to everything on Hyperlink’s plate. Whether the solution involves Augmented Reality for retail, Stage Automation for large format productions and shows, or Virtual Staging Platforms for organizations amid the online model of things, Apaar ensures that the experience is anything but ordinary.

With 11 years of industry experience and a mix of both experiential and corporate events, Rachna has donned many hats in the industry; executive producer, project manager, design consultant and event operations specialist. She has been delivering marketing and communication strategies along with leading operations for new business across sectors. She has also been Executive Producer on theatre musicals Sing India Sing, Disney Aladdin & Monsoon Wedding Musical.

Rooted in the travel business for over 2 decades, Dudley Drego carries a plethora of experience when it comes to travel and tourism. Donning different hats within the travel sector, Dudley brings a holistic approach and attention-to-detail having past experiences in Managing Air Ops at Cleartrip, leading the Airline Contracting and Corporate Leisure Desk at SOTC, and most recently, running the Corporate Journeys (MICE) vertical for Fountainhead MKTG where he was responsible for the verticals P&L. He has had maximum exposure in handling large teams across various spectrums of this business. The FIT & MICE divisions at Hyperlink will see a gentle balance between happy customers, whether corporate or private, and a sustainable team, culminating in a blissful travel experience, with the vision that Dudley brings to it.

A positive force bringing honesty, delight, and global expertise when it comes to travel, Sunita Amarnani is one that will go the mile to deliver an enriching experience. She personally operates with the philosophy that travel today is not just about covering every nook & corner of every continent, but about visiting destinations that enthral you and fill you up with an energy like no other. Her dedication to the travel division is an assurance that one’s travels will not leave them as a tired, home-longing tourist, but an enlightened traveller. Having toured the world, almost all of it, herself, Sunita personally loves travelling and only believes in curating an outstanding, thrilling, and enriching travel experience. Spanning 25 years across Marketing, Tour Planning and Operation in the travel & tourism sector, Sunita promises a real and authentic travel experience.

Pooja Sodhi is a seasoned marketeer. Spanning 20 years of experience, Pooja has been at the forefront of experiences with brands such as Apple, Samsung, BMW, Volvo, Swatch Group, Bang & Olufsen, and LVMH. A dedicated driving force when it comes to ATL, BTL and retail management, Pooja delivers an energy and drive that goes into everything she executes. In her free time, she is an avid traveller and is a fitness enthusiast.

We're more social than you think.
We're hyper-social. Follow us for all updates.